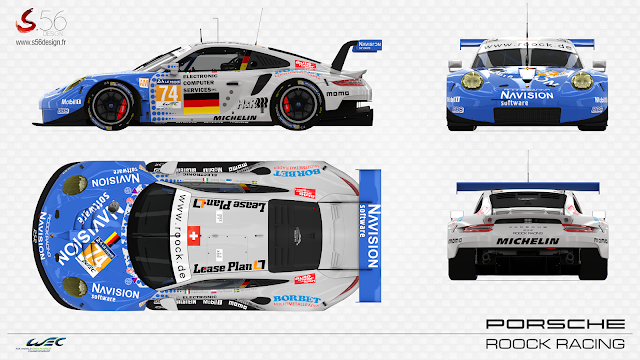 
I have a soft spot for the GTs from the end of the 90s/beginning of the 2000s, mostly because the current GTs are directly related to them in pretty much every way. For some reason I really like the livery Roock Racing had on their 911 GT2 in 1997 at Le Mans so I decided to adapt it to the new 911 RSR. My main reference was this picture from paulvh10.

I started from the rims and then did the blue front-end. I settled for a 1024x512 uncompressed (8.8.8.8) .dds for the rims to avoid the compression artifact DXT5 would cause while keeping the file's weight in check.

When I noticed the original carbon texture did not tile correctly I redid it the same way as for the #71 RaceDepartment Corvette. I used a texture from Kunos as my base to keep the consistency with vanilla textures.

More progression shots. For most of the WIP I kept the grid hidden because I thought it looked cool at that moment (though probably not very functional). Ultimately I put it back towards the end to add some contrast.

The scrutineering stickers back then were pretty big and blended with the livery so I had to try and reproduce the current ones to keep the livery accurate. Because of the lack of references I couldn't get the logo/text at the bottom.

Funfact about this car : the mapping on the front bumper is ~7% smaller and angled at 1.14° on the right side. On the left picture, the red part of wireframe is from the left side of the car. The right picture shows how it affects even the default liveries though the issue is a lot more visible on my Roock livery.

The real car included those circled N stickers so I included them on my livery as well. For some reason they are not included on the default liveries. (maybe not present during testing ?)

Decided to change the serial number of the car and replaced the QR code on the back of the wheel to one which links here. Why not ?

Final progression shots. The junctions on the hood were a real pain to do with all the winglets. Decided to go with a blue rollcage and put the grid back on the side intakes.